Gender vs. Sex: What’s The Difference? 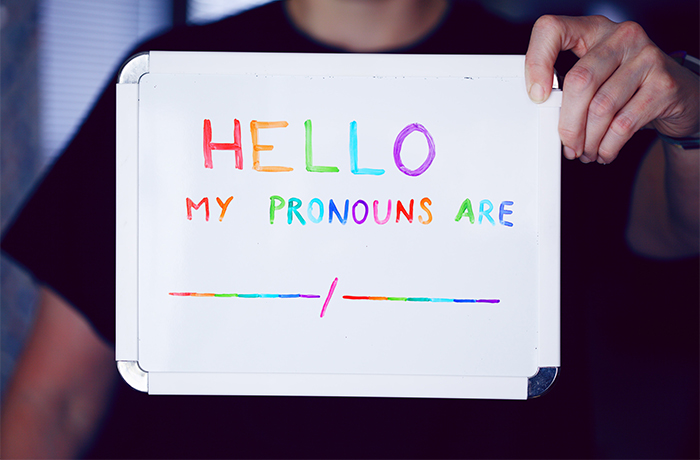 Why is it hard to understand gender vs. sex? Perhaps it’s because your gender is assigned at birth based on the appearance of your sex organs, so it’s easy to think that they’re one and the same.

Culturally, we ignore this fact and categorize people into a binary of male and female. Sex is simplified by this binary, but the reality is not so cut and dry. And while it’s okay to use “female” or “male” as an identity, it’s important to understand the spectrum of sexual variation and gender expression and to distinguish the two.

Knowing the difference will help you better understand the many different kinds of people in the world and your community, and will improve your relationship with yourself and others. ‍

Sex is biological and there is variation in sexual makeup among people.

Your biological sex refers to your chromosomal makeup, your internal and external genitalia, and your hormonal function. All of these things make up who you are, how you develop in the womb, and what happens when you hit puberty.

The 23rd chromosome is the alleged deal-breaker here; this last chromosome is either an X or a Y. This is what doctors have historically used to decide which gender to assign the babies they deliver: male or female.

XX is female, and XY is male. But the misconception is that it stops there.

Genitals aren’t so different after all.

Penis, clitoris? They seem quite different but they aren’t, and they originate from the same source. Let’s nerd for a moment, shall we?

At 10 weeks, all fetuses have a little nub that the medical community lovingly calls the “genital tubercle.” This lil’ nub eventually grows into a clitoris or a penis, depending on gene and hormone function.

That’s right, everyone can get an erection.

That’s where the folds fused!

Gender identity is a social construct.

Gender is a social construct that lies on a spectrum, just like sex variation. Examples of gender expression may be female, male, both, or neither!

Currently, gender is assigned at birth by doctors who have differing interpretations of what constitutes female, intersex, or male. Often, medical teams will pressure parents to “correct” ambiguous genitalia with surgery at birth. But this often backfires by causing the person emotional and physical distress as they grow up.

Gender is an identity expression, not a biological expression and so it doesn’t make sense for medical professionals to make that decision for people. Often, people are incorrectly assigned a gender at birth and this is traumatizing as well.

Just as there are not two forms of genitalia and only two forms, there are not only two genders. Gender is a spectrum and everyone's gender expression is valid. There is simply no wrong way to be.

Some ways that people may express their gender other than male and female are:

Where does sexual orientation fall in all of this?

Sexual orientation refers to what types of people you’re romantically, sexually, and emotionally drawn to. It may be only male, only female, both male and female, neither, or anyone regardless of gender.

If your gender identity is female and you’re attracted to females, you may use “lesbian” to describe yourself. However, new language is always developing on the ground level of every culture to express sexual preference and gender.

This is something to be embraced! It means that we’re getting better and better at describing our individual experiences and advocating for all people.

People who don’t easily fit into standard gender norms may let you know what their pronouns are so that you can properly address them. They may use “she/her,” “he/him,” “they/them”, or a combination of those like “she/they.” Some people wear a pin with their pronouns so they don’t have to repeat themselves to everyone they interact with throughout the day.

All you have to do is try to honor these pronouns when you address them. If you’re used to assuming genders based on the binary, you’ll probably mess up. Everyone does it, so just apologize, correct yourself, and continue on with your conversation.

If you have the urge to ask someone what they are--don’t. It’s rude and intrusive. Instead, ask yourself why you need to categorize them in order to comfortably interact with them? Once you investigate this notion in yourself, it’s really easy to let it go. You’ll find that in most cases, you really don’t need to know at all. But if you do, the person will most likely just tell you.

It’s really quite simple: there is variation in gender.

It’s not complicated, it just may not be what you were taught. But we can quickly file it away with the other things we were taught like Santa is real and when you grow up you’ll have your shit together, and replace it with the new information.

There are more than two genders, and when you think about it, it’s really not that far-fetched. We did evolve from primates, after all. Now that’s some crazy stuff!

We hope you've found this article on gender vs. sex to be educational. If you'd like to discover more, check out this article about the different terms for gender and sexuality.

How Jealousy Affects Us and How To Cope

We all feel a little jealous from time to time. It’s human nature. But when is jealousy justified and when does it become harmful? In this article we’ll explore what jealousy is, how it can affect us, when it’s based on reality, and how to cope.

Pain During Sex: The Causes and What to Do About It

Have you ever experienced pain during sex? Perhaps discomfort during penetration or a burning or stinging sensation? If so, you’re not alone. According to the ACOG, 75% of women experience pain during sex at some point in their lifetimes.
Get Emjoy App