Here’s Why You Should Always Pee After Sex 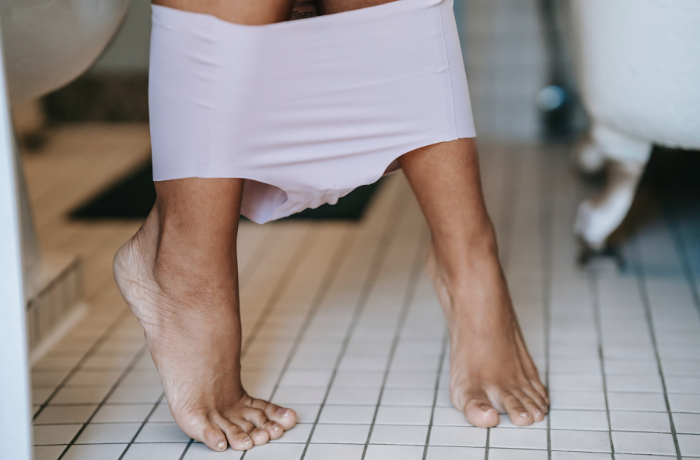 There’s more to safe sex than using protection. Safe sex also involves knowing how to take care of yourself as a sexually active person. As you may already know, at Emjoy we are of the firm belief that taking care of your body is vital to having great sex. And one of the simplest things you can do for your body is to always pee after sex. It’s a small action that might feel like an afterthought. But it can make a huge difference to your health.

If you have a vulva, listen up.

If you’ve never had a UTI, take a second and count your lucky stars. They’re easily treatable but they are not fun. And for all the vulva owners out there, your chance of getting a UTI is 30 times higher than penis owners.

However, just because you have a vulva doesn’t mean you’re going to get a UTI. It just means you’re more susceptible. But peeing after sex lowers your risk. Let’s dive into what’s happening here.

Your urethra is kinda short.

No offense. But it’s true, your urethra is about 4cm long, shorter than the urethra of a penis. Located just above the vaginal opening, surrounded by absorbent tissue (hello Skene’s gland!) and below the clit, it’s a tad vulnerable.

Its main job is to get urine from the bladder out of the body, and it passes through the pelvic floor to do this. The pathway is short, so bacteria don’t have to travel very far to get to your bladder.

And when they do, they start multiplying. Think “You’re The One That I Want,” but instead of John Travolta, it's a burning sensation when you pee.

Your urethra is next door neighbors with your anus.

In the case of the penis, the urethra is located at the tip. That’s a pretty long distance from A to U (anus to urethra.) But for vulvas, the anus is just around the corner.

The most common type of UTI is caused by E. coli traveling from the rectum to the urethra. It infects the urethra and the bladder.

When this happens, you can experience the following symptoms:

These symptoms are uncomfortable and you need to address them ASAP. And they’re treatable with antibiotics and a little willingness to ride out the pain. But if the infection spreads to the kidneys, it can become quite serious. Chills, nausea, fever, and vomiting are symptoms that signal you need to get to a doctor right away.

However, this is rare. In most cases, a round of antibiotics solves the problem.

UTIs happen for many reasons, but sex is the main cause.

Several studies have confirmed this. One study that observed 288 women found that not only did sex increase the risk of getting a UTI, using a condom actually increased the likelihood by 43%.

A study at Michigan University found that UTI occurrence did correlate with sexual activity. And urinating after sex lowered that risk.

Some people are more prone to UTIs than others. Another study recently found that the culprit for this is actually bacteria found in the vagina. This bacteria, lovingly named Gardnerella Vaginalis, can actually get into the neighboring urethra and cause dormant E. Coli from a past infection to wake up and start spreading the infection. Again!

So sometimes it can be your own vagina that's to blame!

Why does peeing after sex help?

During sex, there’s a lot of touching, moving, rubbing, caressing, licking, kissing, and maybe even some penetration. Right?

Sometimes bacteria from the outside world find its way to the urethra. For people with penises, this isn’t really a big deal. You see, in the penis, urine shares a pathway with ejaculate. And that pathway is going to get flushed, leading all unwanted bacteria out the door.

But for vulvas, the urine is the only thing passing through that pathway. Even though female ejaculation does happen, the ejaculate comes from the tissue that surrounds the urethral opening, rather than the urethra itself.

This means that nothing is going to flush that pathway except for some good ol’ fashioned urine.

So if bacteria does get in, and you never know, urinating flushes it out before it can reach the short distance to your bladder and start raising hell like it loves to do.

This is the downside of sharing a highway with ejaculate. The risk is lower, but if infection happens, more functions can be affected.

But, don’t freak out.

Forgetting to pee after sex doesn’t mean you’re going to get an infection. Some people are more prone to UTIs, but even if this sounds like you, this isn’t something to worry about. Rather, it’s a tool in your arsenal of safe-sex practices that you can easily pull out when you need it.

Don’t feel like you shouldn’t have sex if there’s not a bathroom nearby for you to use right away. Don't worry about resting for a minute to bask in the glow of a great session. But do it sooner than later. Most doctors recommend that you do it within a 45-minute window in order to effectively flush any bacteria out.

If you do get an infection, you can rest assured that the problem can easily be solved by seeing your doctor.

A note on STIs and bacteria.

Some STIs can cause the urethra to develop a bacterial infection. Herpes, gonorrhea, chlamydia, and mycoplasma can be to blame. However, peeing after sex doesn’t protect again sexually transmitted infections.

Instead, it helps to prevent bacterial infection. So practicing safe sex means protecting yourself from STIs, getting tested, using contraception if you don’t want to get pregnant, getting and giving consent, and now it means peeing after sex too.

5 Self-Love Habits to Boost your Health, Happiness and Self-Esteem

Give yourself some more TLC with these five self-love habits to improve your health, happiness and self-esteem.

Am I A People Pleaser?

Would you or others describe yourself as a people pleaser? Read on to find out the signs of people pleasing and some of the motivations behind these behaviors.